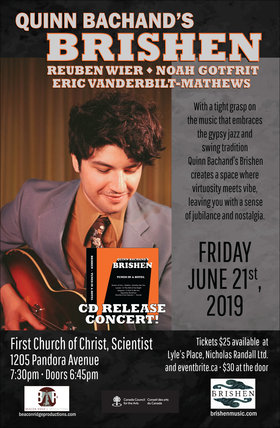 Music: Folk / Celtic / Latin / World, Jazz / Blues, Tribute / Cover
Brishen, Romany for ‘bringer of the storm’, is what 23 year old Quinn Bachand, one of Canada’s most outstanding award winning young musicians, and his band serve up with their original western and euro-gypsy swing homage.

With a tight grasp on the music that embraces the swing tradition, Quinn Bachand’s Brishen takes audiences on an inventive quest which, through its technical virtuosity, brings together a spellbinding range of musical history to reinvent the categories of swing jazz, pop and country, celebrating the music of the ‘30s, up to and including the ‘60s.

Quinn Bachand’s Brishen creates a space where virtuosity meets vibe, leaving you with a sense of jubilance and nostalgia. The band has toured across Canada, the United States and Europe, performing at major folk, jazz and gypsy jazz festivals. They’ve been nominated for five Canadian Folk Music Awards, two Western Canadian Music Awards and in 2018 won an Independent Music Award in the Jazz category for their sophomore album, Blue Verdun. Their third, and much anticipated album, “Tunes in a Hotel Room” was released in Europe earlier this year and this will be the official launch in Victoria!

The band includes the talented Reuben Wier on rhythm guitar and vocals, Noah Gotfrit on upright bass and Eric Vanderbilt-Mathews on saxophone and clarinet. Quinn takes the lead on guitar, violin and vocals. http://www.brishenmusic.com