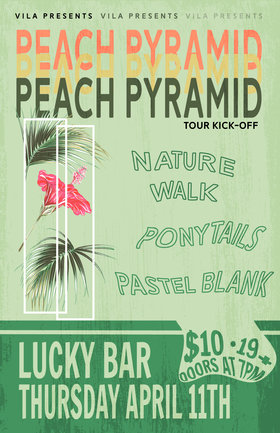 Peach Pyramid is the brimming honesty and personal experience of one Jen Severtson. An internalized cry pulled to the surface; transformed and juxtaposed by way of graceful melodies and swirling guitars. Supported by a rotating collective of musicians/ close friends, Peach Pyramid sonically exhales Jen’s intimate narrative.

Recorded at Little Red Sounds with Felix Fung And recorded over the course of three long days really pushed the band and producer to their fullest. The band released their first single "Pieces" on October 1st 2016 followed by a full release of the EP on November 1st.

The anticipation of their EP was stregthened by word of mouth from their electric live performances, off stage antics and DIY social media presence. They have been described as, "mutated brew of elegantly structured, psychadelically-tinged pop and rock with a decidedly retro vibe."

Drummer Simon Furminger left the band late September 2017, to be joined by Graham Serl, a powerful addition to round out the bands sunburnt surf sound.

They have shared the stage with the likes of, La Luz, Widowspeak, Peach Pit, And Leisure Club. Ponytails will be releasing a series of EP's and music videos starting in July and will release a full length LP in the spring of 2019.

//
Pastel Blank (Victoria, BC)
BC: https://pastelblank.bandcamp.com/

Plus Nature Walk (solo of Niq Joy of Teenage Wedding)

//
Please approach one of the show organizers if you feel unsafe or uncomfortable by any behaviour at the show.