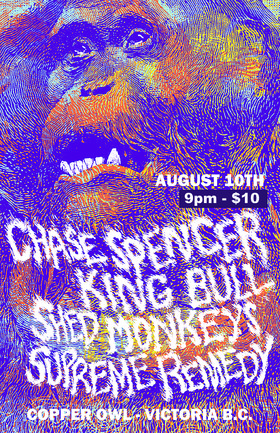 KING BULL (On tour from AB)
King Bull is the collection of three friends with the likeminded goal, to play rock and roll. The members have been intertwined since their early youth playing in various groups with each other throughout middle and highschool. In just three short years King Bull has recorded a demo, have had airplay on local radio, sold out multiple headlining shows and supported acts such as Sebastian Bach, The Beaches, Monster Truck, One Bad Son, The Lazys, and The Standstills. After recently working with Juno nominated producers and engineers at Velveteen Audio located in Edmonton Alberta, they have recorded and released their debut single Sha Na Na along with a b side titled Mouthbreathers.
https://linktr.ee/Kingbull

CHASE SPENCER
He recorded with producer Lance Lapointe (VIMA Musician of the Year) and Malcolm Owen Flood (Band of Rascals) at Woodshop Recording Studios on Vancouver Island throughout early 2018. From these recordings, he has released two singles: "Whiskey" and "Lost in The Dark,” with a new EP on the way.

The influences of 90’s alternative rock and acoustic folk, along with his crisp vocals creates a warm sense of nostalgia; his song writing technique produces an innovative and distinctive sound that is becoming his own signature style. With a full band behind him, his energetic stage presence makes you want to get up, sing along, and stomp your feet.
http://www.chasespencermusic.com/

Shed Monkeys are a four piece modern rock band from Victoria, British Columbia, Canada. Drawing inspiration from artists such as Reignwolf, Cage the Elephant, The Dead Weather, and Rage Against the Machine, Shed Monkeys has cultivated a polished yet gritty sound. With two powerhouse vocalists up front and a steady yet experimental rhythm section ba... more info

Supreme Remedy was born out of a mutual desire for crunchy guitars, cacophonous drums, and energetic live performances. Formed by Nico Turner (guitar/vocals), Gage Patenaude (drums), and Kevin Ishizaki(guitar/vocals), the trio was later joined by Dylan Parr(bass). Supreme Remedy is influenced from hard rock bands of the past and present; from Queen... more info
Submit info on this show to our admins