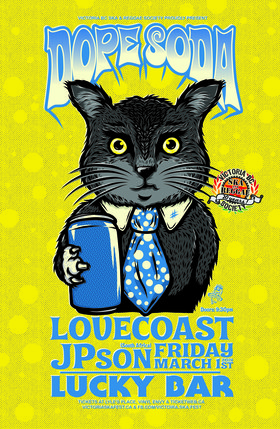 Music: Folk / Celtic / Latin / World, Funk / R&B, Pop / Rock / Indie, Reggae / Ska / Dub
Friday, March 1 at Lucky Bar is set to be another one of those smaller intimate shows that bring together some of the Island's most talented with an international twist.

We are excited to bring Dope Soda and Lovecoast together for the first time with JPson from South Africa.

For those of you that are familiar with Dope Soda the band is a party in and of itself. Ska, reggae, hip hop, funk are just some of their favourite styles of music they bring to the party. Dope Soda brings energy to the stage which translates to energy on the dancefloor. They jumps back and forth between reggae jams, punk-rock assaults, happy ska romps, and hip-hop throw-downs– a thirst quencher for audiences who need good rhymes and good times.

Lovecoast has some of the same musical elements of Dope Soda (and some of the same members too ;) but they focus on more of a relaxed style that brings together modern pop with 70s R&B. Influenced by bands such as The Cat Empire, Billie Holiday and Bruce Springsteen the band's range is wide. But no matter the influence Lovecoast adds a modern twist that makes you want to listen to them more. Notably they were heavily involved in creating "Doubtless" which is a No Doubt Tribute band which played at Victoria Ska & Reggae Fest in June 2018.

JPson (South Africa) blends folk, hip hop, reggae to create his sound. His sound reflects his philosophies and lessons he's learned throughout his travels. No matter where he went his music was his strength.