THIS EVENT IS SOLD OUT Edie Daponte introduces her newest studio album ‘Ale...

THIS EVENT IS SOLD OUT

Edie Daponte introduces her newest studio album ‘Alegria’
About Alegria
"Another beautiful album from Edie Daponte. Packed with passion, joy and love Alegria brings a mix of musical influences all tied together with Edie's rich, powerful vocals. On this collection of classics and originals, Edie has teamed up again with some of Vancouver Island's greatest musicians. Taking us to Spain, Portugal and France there are jazz, bossa nova, fado and blues numbers. If you've seen her perform live you'll know the emotion Edie brings to every number - Alegria radiates with her charm, what could be lovelier? - Deborah Rogers, Editorial Director, Seaside Magazine
Joey Smith - Bass/guitar, Karel Roessingh/piano, Damian Graham/drums, Miguelito Valdes/trumpets with special appearances from Eric Harper/guitar, Bill Johnson/electric guitar, Tony Genge/organ
About Edie Daponte:
Equally at home in an intimate lounge setting or an outdoor festival stage, Edie Daponte has established herself on the music scene of Vancouver Island and Western Canada. Dynamic and engaging, Edie brings passion, playfulness and an evident love of performance to her live shows. Momentum is gathering behind the singer after her 2018 tour of ‘Under Paris Skies: la musique d’Edith Piaf’ saw sell out shows on Vancouver Island, and rave reviews in Vancouver. A regular of the Victoria jazz scene, Edie has been performing at jazz clubs in Victoria for many years. Vancouver Island Music Awards awarded Edie with "Jazz Recording of the Year" in 2017 for her original song "Island Rain" and nominated her as "Vocalist of the Year" in 2016. Edie's original song 'Ride the Wind' was nominated in the Traditional category for the 2017 International Portuguese Music Awards (IPMA).

Emotive, passionate and deeply sexy, audiences have come to expect a wide variety of styles from Edie’s performances. You can feel her love of music and rhythm as she moves seamlessly from bossa nova to jazz and back again, switching between Portuguese, Spanish and French language numbers effortlessly. After 2012’s Love Bossa - a latin-styled collection sung mainly in Brazilian Portuguese, and 2015’s Young at Heart - a collection of Edie’s own material alongside cover versions inspired by the wild west-coast of Canada, Edie has recently been back in the studio recording a globally-inspired album. Alegria is a personal reflection, of songs that Edie loves, sung with her trademark passion, and backed again by some of Vancouver Island’s finest musicians.
Physical tickets at: Lyle's Place Victoria, Tanner's Books

Jazz, folk, pop and blues from Victoria BC
Available for Shows/Gigs

i hit things.... from Victoria BC
Available for Shows/Gigs

Acoustic Roots n Blues from Victoria BC
Available for Shows/Gigs 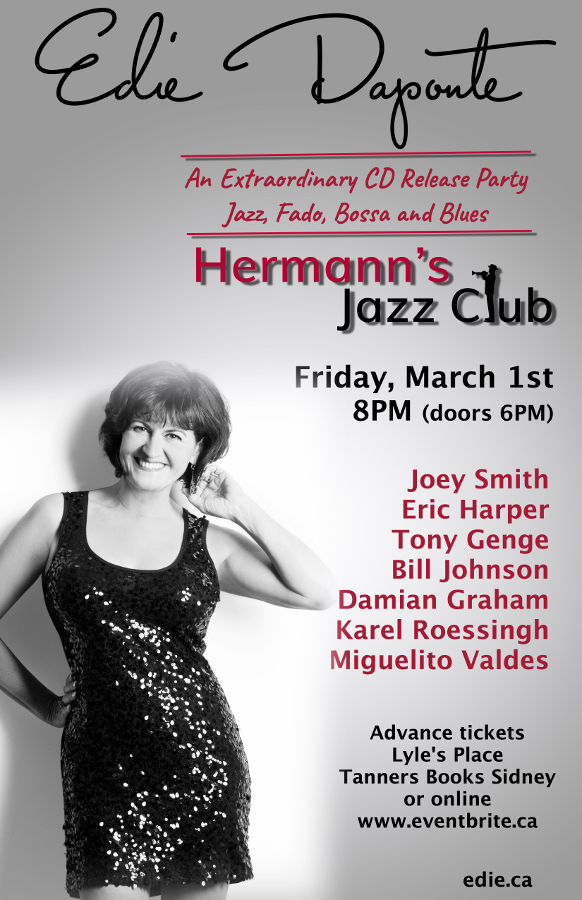