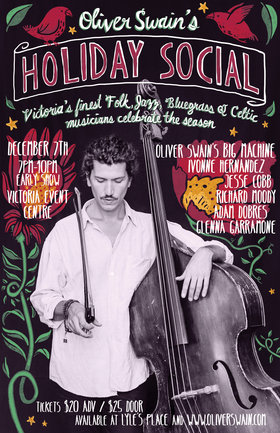 This holiday special includes Victoria's top Folk, Jazz, Celtic and Bluegrass musicians all on stage together sharing their brilliance! Each one of these world class musicians will be leading and accompanying throughout this special night.

Oliver Swain's BIG MACHINE - Has as been a celebrated musician for years, held in high regard in acoustic and folk music styles for both his astonishing instrumental and vocal abilities, though he seldom gives the genre a fully traditional treatment. JUNO & WCMA nominated, winner of multiple "M" and Times Colonist music awards.

Jesse Cobb - This Nashville transplant originally from Dairyland Wisconsin was an original member of The Infamous String Dusters one of Tennessee's great modern bluegrass groups. A top flight American Mandolinist and guitar player, complete with a high lonesome sound and southern drawl.

Adam Dobres - After a long career as one of Canada's most in demand accompanists, Adam Dobres Released his first Solo Album in 2017 to much critical acclaim and a Western Canada Music Award Nomination.

Richard Moody - Know both as a world class violin and viola player and an underground legend, Richard Moody had just finished recording an album of original music set to be released in 2019

Oliver Swain, a Juno and WCMA nominated Americana and Folk-Noir musician from Victoria BC spent a dozen years in some of North Americas most loved roots bands(Outlaw Social, The Duhks, The Bills) before releasing 'In a BIG MACHINE' in 2011 to rave reviews â€śOliver Swain's brilliant vocals and genre-agnostic style make 'In a BIG MACHINE' one of the... more info

At 19 years of age, she has done more than most people do in a lifetime. A seasoned veteran of the stage, Ivonne has performed and studied with Natalie MacMaster, Ashley MacIsaac, Mark OąConnor and April Verch to name a few. As one of Canadaąs hottest young performers, she has also opened for the Paperboys, Jann Arden, Stomp, Oscar Lopez and Farmer... more info

Canadian born Adam Dobres is a natural born guitarist with a sensitive ability to embody any style of music. His love of the guitar began at 12 years of age, when his father brought home a guitar from the local thrift shop. Adam took to the guitar like a duck to water. Although he is classically trained, Adam thrives in exploring any style of music... more info
Videos: