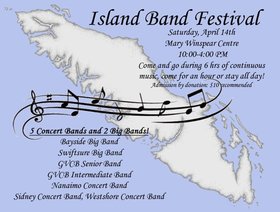 Music: Classical, Country / Bluegrass / Rockabilly, Jazz / Blues
The Greater Victoria Community Band is proud to present an Island Band Festival on Saturday, April 14, at the Mary Winspear Centre in Sidney. Come out to hear all the great music this Island has to offer!

Beginning at 10:00 AM, the GVCB will host 5 concert bands and two big bands from all over Southern Vancouver Island. The Island Band Festival is sure to be fun entertainment for the whole family. There will be a BBQ concession with food available for purchase throughout the day.

The Greater Victoria Concert Band includes over 100 musicians, all working together to enjoy playing. We have musicians from all walks of life: students, music teachers, engineers, lawyers, accountants and more. We play 10–12 concerts a year throughout the Capital Region and beyond.

Want to join in? The Greater Victoria Concert Band offers you a chance to play with other musicians in any of our four skill levels. The Senior Concert Band, Intermediate Band and adult Junior Band all participate in public performances throughout the year. In our Novice Band, we can teach you how to read music and to play the instrument of your choice.

For concert dates or to join the band, visit us at http://www.gvcb.ca and like us on Facebook.

The Sidney Concert Band is a 40-member community concert band where musicians of all ages gather to enjoy playing music while endeavouring to better the musical capabilities of the members. more info