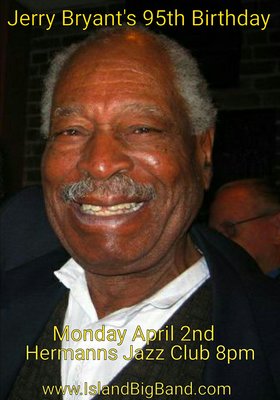 Music: Classical, Jazz / Blues
When an statesman of the music turns 95, it is important to take notice and pay tribute to a lifetime of music tradition that is passed on to us.

On Monday April 1st 2018 Jerry Bryant turns 95. To the joy of the members of the Island Big Band, Jerry agreed to join the band by request over a decade ago and has since added his musical depth of knowledge, humor, and steeped tradition on the piano and vocals to the bands sound. On the occasion of his 95th birthday The Island Big Band presents a special concert featuring Jerry and a few special guests. The concert features Jerry on Vocals and Piano, backed up by the 20 piece Island Big Band. There is also some surprise guest soloists from a lifetime of music joining the band.

In his 95th year Jerry is sending out some musical treasures for all to hear. Don't miss your chance to hear him this April 2nd 2018 at Hermanns Jazz Club!

Jerry Bryant's music reflects his uniqueness. His Wide and varied background form the basis of his musical personality. Born on April Fool's day 1923 in Kansas City, his roots are in the blues tradition. Strong early influences also come from his famous uncle, the great blues singer Joe Turner. He spent time in Grand Rapids Michigan before se... more info

other sites:
Originally from Boston, MA, Cliff has played throughout the US and Canada in a variety of Jazz, Blues and Rock settings as well as studio dates and theatre pit bands. He has also taught at Berklee College of Music (Boston, MA) and Selkirk College Music Program(Nelson,BC). more info