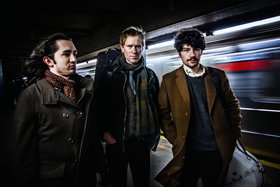 Kittel is an award-winning fiddler, violinist, and composer, nominated for a Grammy Award. The Compass Records recording artist is a master in Celtic, classical, jazz, and bluegrass traditions, and is gifted in fusing and revitalizing these diverse styles. Jeremy was a member of the Turtle Island Quartet for five years and has also worked with Mark O’Connor, Bela Fleck, Edgar Meyer, Chris Thile, Paquito D’Rivera, My Morning Jacket and Jon Batiste and Stay Human. He has been a guest artist with several symphony orchestras, was twice featured on A Prairie Home Companion, and has performed around the world at venues as diverse as Carnegie Hall, the Kennedy Center, Bonnaroo and the Celtic Connections Festival in Scotland.

Named “the future of the mandolin” by Mandolin Magazine, and dubbed “one of the most important young improvisers on the acoustic scene today” by mandolin grandmaster David Grisman, Josh Pinkham has established himself as a striking performer, composer and recording artist. He continues to push his mandolin into new and old territory, excelling in Bluegrass, Newgrass, Jazz and Classical music.

Although Quinn Bachand plays a range of styles that include jazz and bluegrass, it is his talents in the world of Celtic music that draw the most attention. His unique harmonies, hard-driving strumming, inventive chord voicing and powerful rhythmic effects make even the most well-worn tunes seem new and exciting. He fronts his own gypsy swing ensemble, Brishen, and also performs with his sister Qristina. He has also toured nationally and internationally with Canadian fiddling icons Ashley MacIsaac and Natalie MacMaster. http://www.jeremykittel.com

Advance tickets $20 at Ivy's Bookshop and the Oak Bay Recreation Centre. Online tickets at http://www.beaconridgeproductions.com
$25 at the door

The Upstairs Lounge is a licensed restaurant, doors open at 6 pm for dinner service, the concert starts at 7:30 pm. Please note this is a listening venue.