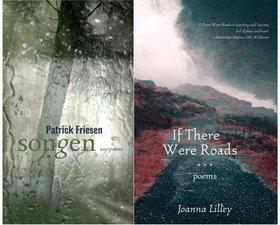 Literary:
Patrick Friesen is a poet and playwright who also writes song lyrics, text for improv piano and for modern dance. He has been short-listed for the Governor General's Award for Poetry (1997), the Dorothy Livesay British Columbia Book of the Year (1998), and he won the Manitoba Book of the Year Award (1994). His most recent book, Songen, is a book of swift-moving poems, each of them one sentence long, though the sentences are often not grammatically correct. They explore various subjects, but focus frequently on human pre-history and on the process of getting old.

Joanna Lilley’s poetry collections are If There Were Roads (Turnstone Press) and The Fleece Era (Brick Books). She’s also the author of the short story collection, The Birthday Books (Hagios Press) and her debut novel, Worry Stones, is out in October 2018 with Ronsdale Press. Joanna lives in Whitehorse, Yukon. Guided by the geography of land and mind, the familiar and the unknown converge in If There Were Roads.

The Planet Earth Poetry reading series is a launching pad for the energies of writers and poets established and not. The evening begins at 7:30 with an open mic, followed by a featured reader(s). Planet Earth Poetry is located at Hillside Coffee and Tea, 1633 Hillside Ave (across from Bolen Books). Between 7 and 7:15, put your name in the hat to read at open mic.