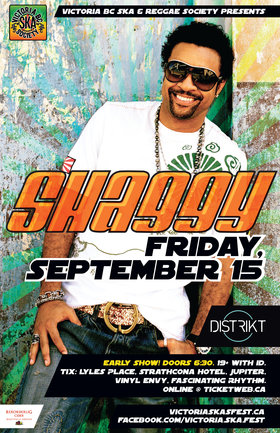 Fast-forward three years later Shaggy is back for more now with a brand new single "That Love."

Since Shaggy last came to Victoria him and his team have continued to sell out shows throughout the world with the strength of Shaggy's most recent reggae album Out of Many. And not only have they continued to be successful on tour but they have been ambassadors for the genre overall. It was Shaggy's marketing team that helped Tessanne Chin win "The Voice" competition in December 2013 and Shaggy has personally been an advocate for rising reggae superstar Chronixx encouraging people worldwide to listen to his music and tune into entertainment programs such as Jimmy Falon (whom he has been a guest on several times over the years) to raise the profile of the reggae genre to new audiences.

Join us in celebrating the life of a living reggae legend at Distrikt Nightclub! Spread the word and tell your friends. This show always sells out so get on top of purchasing tickets!

With a commanding presence, a distinctive voice that is recognizable throughout the world and titles such as artist, businessman, philanthropist and Grammy Award winner, Shaggy is and has been a forced to be reckoned with. A son of the brambly streets of Kingston, Jamaica, his discipline-which he credits to his military background-has been the foun... more info
Submit info on this show to our admins