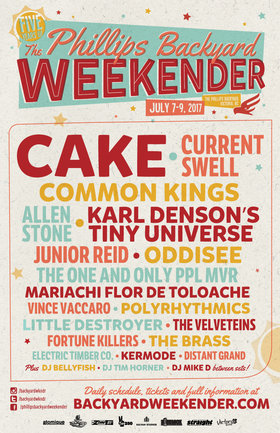 Disguised as a brewery parking lot by day, the Phillips Backyard magically transforms into an outdoor music super-party for three unforgettable nights. Set against the backdrop of our beloved local craft brewery in the open air of downtown Victoria's communal backyard, The Phillips Backyard Weekender is a summer highlight not to be missed.

From backwoods barbecues and community gatherings; Allen Stone emerges to share personal melodies, telling his tales of life after just 24 years. Getting his start singing at his father's church in small-town America; it wasn't until later when introduced to the greats of soul music (Marvin Gaye, Aretha Franklin) and then to the confessional lyrica... more info

Vince Vaccaro (born 1980) is a Canadian singer-songwriter, guitarist and record producer. He has performed largely as a solo artist, appearing both solo acoustic, and backed up by a five to eight piece band. His musical influences include Bruce Springsteen, Ben Harper, Eddie Vedder, Adam Granduciel, and Matt Mays. Vaccaro has played shows in ... more info
Submit info on this show to our admins