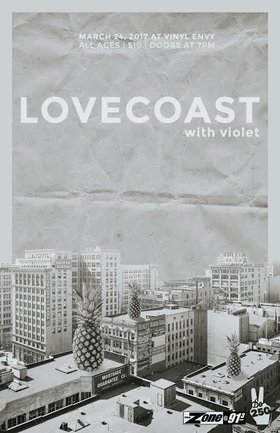 Tickets at the door or in advance via Eventbrite here: http://bit.ly/2mygYJo

Lovecoast
Since their inception in 2013 Lovecoast has been delivering a new sound that won’t go unnoticed. By bringing "together modern day indie pop and blue-eyed ’70s R&B” (Ride the Tempo), the band has created something bouncy and infectious. Lovecoast finds inspiration in modern acts like the Cat Empire and Lake Street Dive, and classic legends such as Billie Holiday and Bruce Springsteen. Uniquely fresh and nostalgic all at once, Lovecoast is an up-and-coming act from the West Coast of Canada to watch.

Violet
While their sound is something familiar to the ears, Violet is distinct in the new age of gritty R&B. Led by singer Theresa Pasaluko and guitarist Matt Bromley, the band combines electrifying vocal melodies and insightful lyrics with raw and untamed slide guitar. Sean Thompson digs deep on drums with Aaron Scoones and Bob Gronotte rounding out the rhythm on bass and guitar.

Based in one of Canada’s hottest music scenes, Victoria B.C. Violet solidified its lineup in late 2016 and is geared for a busy year playing festivals and spending time in the recording studio to complete its debut album.