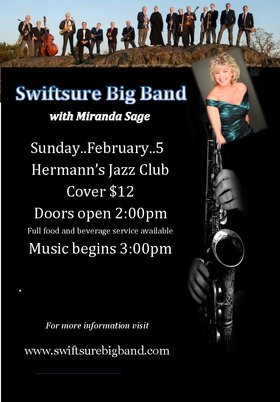 The Swiftsure Big Band performs regularly at the Pacific Fleet Club and Edelweiss Club. The band has also performed at various venues in the Greater Victoria area, including the Empress Hotel, Government House, the Crystal Gardens, the Delta Ocean Resort Hotel, Beacon Hill Park, the Chief and
Petty Officer’s Mess and the Ward Room.

Swiftsure is a 17 piece band with vocalist that performs music of the swing-era (1930s & 40s), as well as more contemporary Latin and jive tunes.
To book or for further information about the band call Ricky at 250-857-8778 more info

other sites:
Well-known Victoria vocalist Miranda Sage is an audience favourite thanks to her impressive three-octave voice and an ability to get deep inside of any song she’s singing. Whether live or on record, Miranda is a consummate musician and entertainer. Check out her new album DayDream. Tony Genge piano and Ken Lister bass more info
Submit info on this show to our admins