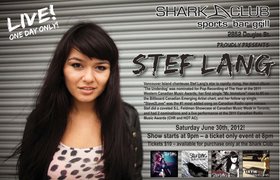 Vancouver Island chanteuse Stef Lang's star is rapidly rising. Her debut album 'The Underdog' was nominated for Pop Recording of The Year at the 2011 Western Canadian Music Awards; her first single "Mr. Immature" rose to #5 on the Billboard Canadian Emerging Artist chart, and her follow up single, "Slave2Love" was the #1 most added song on Canadian Radio upon release. With a coveted S.L. Feldman Showcase at Canadian Music Week in Toronto, 2 nominations and a live performance at the 2011 Canadian Radio Music Awards (CHR and HOT AC) - Stef Lang is definitely a name you'll want to remember, and one you won't be able to forget.