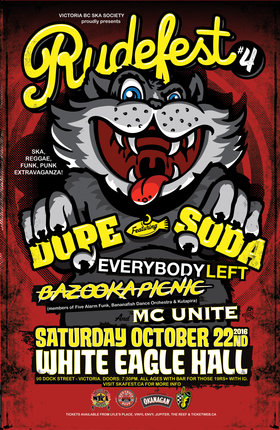 Music: Funk / R&B, Funk / R&B, Pop / Rock / Indie, Pop / Rock / Indie, Punk / Metal / Hardcore, Punk / Metal / Hardcore, Reggae / Ska / Dub, Reggae / Ska / Dub
We have taken a nice long rest from an unforgettable summer following Victoria's 17th Annual Ska & Reggae Festival and now we're excited to bring you the first installment of our Fall Fun Season with RUDEFEST 2016. This annual tradition that began four years ago will be just as good as last year. We have ska, reggae, funk and punk all in the mix for dancing and fun from the second you set foot in the hall.

You'll be happy to know as with the tradition with RUDEFEST the show will be all ages w/beverage service for those 19yrs+ w/ID. Those of age will be required to wear an event wristband. And remember to come EARLY so you can catch ALL of the bands. When you have a four band bill you gotta have one start early but that just means there is more fun for everyone!

Mythical creatures need loving too. MC Unite! is a surf-punk-reggae party band from Victoria whose hilarious and unpredictable live shows have earned them fans up and down the island. Performances are usually accompanied by a “tickle trunk” of costumes for the band and audience members to don. Want to crowd-surf in a unicorn mask? Go for it. Cr... more info
Submit info on this show to our admins