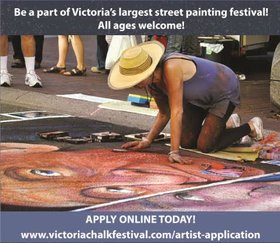 Music: Jazz / Blues, Jazz / Blues Visual Arts: Cultural / Heritage:
Welcome to Canada’s largest street painting festival! Our family friendly, free-to-attend arts celebration presents some of the world’s top street painters (including 3D chalk art) as well as those from across British Columbia and our local region at Ship Point in the Inner Harbour & The Bay Centre.

Our festival’s First Nation’s theme for 2016 is “Adventure in the Forest World; a Celebration of Nature’s Spirits”. We present a number of First Nation’s singers, dancers and drummers on our outdoor performance stage on the Victoria waterfront which is also home to our kid’s chalk zone – free chalk provided!

Scott Gillies, originally from Viking, Alberta, now lives in the Strawberry Vale district of Vancouver Island. After completing a science degree in Forestry from the UofA, Scott worked in the Forestry industry for six years taking him to Northern BC, Alberta, Northern Ontario and Missouri. This science background and appreciation for nature was a c... more info

other sites:
Naomi Kennedy was born in Penticton, BC in 1983 and lives and works in Victoria, BC. Art is a powerful vessel, for it is a visceral way to merge design, color and iconography. As an artist, and community worker Naomi Kennedy holds two integral beliefs. The first are the words of Jon O’Donahue, that "beauty can incite healing on a person when t... more info

Quench you thirst with Drinkable Jazz Drinkable Jazz is fronted by Victoria resident, Linda Billings. She is a passionate vocalist who brings heart and soul into each of her diverse styles of songs. Jazz and blues standards with a smattering of country are featured in her eclectic repertoire. more info
Submit info on this show to our admins