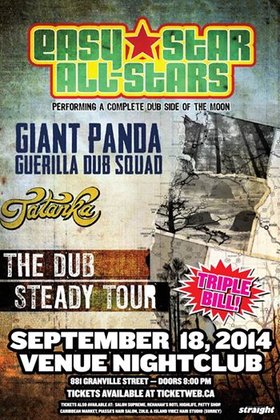 Combining musical versatility, instrumental prowess, beautiful vocal harmonies and a superb rhythm section, the Easy Star All-Stars have established themselves as one of the top international reggae acts since their live debut in 2003. Thanks to their best-selling tribute album releases, Dub Side of the Moon (2003), Radiodread (2006), Easy Star’s Lonely Hearts Dub Band (2009), Dubber Side of the Moon (2010), and Easy Star’s Thrillah (2012), as well as original albums First Light (2011) and Until That Day (2008), the Easy Star All-Stars have built a growing, dedicated fan base throughout the world, bringing together fans of reggae, classic rock, dub and indie rock into one big family.

The All-Stars have toured in over 30 countries on 6 continents. They’ve played loads of major festivals throughout the world, including an unprecedented three-day, three-stage stand at Glastonbury in 2009, which earned them a UK Festy Award Nomination.

For this tour, the Easy Star All-Stars are returning to their first release to celebrate the decade anniversary of Dub Side of the Moon. By far their most popular release, Dub Side is a complete reggae re-imagining of Pink Floyd’s Dark Side of the Moon, which will be played in its entirety during the band’s set on this tour. This will be accompanied by new visuals, as well as other material from the band’s other tribute albums and originals.

Giant Panda Guerilla Dub Squad is an American Jam reggae band based in Rochester, New York whose eclectic blend of roots reggae, dub and afrobeat has garnered them a large and growing following. Since forming in 2004, Giant Panda have performed hundreds of shows across the continent, with over 500 being in the last three years including performances at premier venues and festivals such as Red Rocks and Rothbury. The band has shared the stage with reggae greats Toots And The Maytals, The Wailers, Lee Scratch Perry, Yellowman, Culture, The Meditations, Don Carlos, Morgan Heritage, Mad Professor, and Edi Fitzroy. Thanks to an aggressive touring schedule and a dynamic sound they have developed a widespread grassroots following. Their first release on Easy Star Records, STEADY, will be released Sept 30, during this tour.

Tatanka specializes in the sounds of dub, progressive reggae, and electro soundscapes. Heavy Caribbean drum and bass grooves provide the pulse for the party as the music invites you to get down and dirty. These Denver dub warriors released their first studio E.P., Sounds in Technicolor, last year. The release has been dubbed drum and bass music for a new generation and a twist on new and old reggae riddims. Tatanka released a new full-length album entitled John Dunbar last fall. The group has built a rapidly growing fan base in their hometown of Denver. This is attributed to the diverse and unique sound the band has developed over years of playing together. Tatanka draws fans from both reggae and electronica crowds and, thanks to extensive touring, the group is winning over fans across the country.

The Easy Star All-Stars are a collective family of some of the finest reggae musicians in the New York area. The band features a rotating cast drawn from a talented pool of players, meaning that every show has its own nuances and its own life. The masterminds behind the All-Stars are Easy Star musical director Michael Goldwasser (a.k.a. Michael G),... more info
Audio: Climbing Up the Walls, Karma Police, The Great Gig in the Sky

Stomping out of Rochester, New York, GIANT PANDA GUERILLA DUB SQUAD has been keep the classic roots and dub reggae sounds alive and well for over 13 years. A mainstay on reggae festivals and circuits around the United States, GPGDS built their reputation on their tight, engaging live show, shifting through influences and styles like nobody's busin... more info
Submit info on this show to our admins