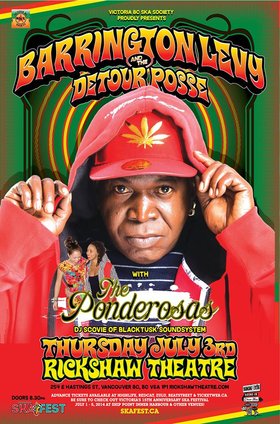 Music: Electronic / DJ, Folk / Celtic / Latin / World, Hip Hop / Rap, Jazz / Blues, Reggae / Ska / Dub
It's been a minute since Barrington Levy & Detour Posse set foot on the west coast of Canada. It was 2011 when he played a pair of shows in Victoria and Vancouver to celebrate Pepperpot Radio's 10th Year Anniversary. NOW BARRINGTON LEVY is returning to celebrate Victoria's 15th Anniversary Ska Festival and he is going to make a pit stop to his old stomping ground in Vancouver.

Victoria BC Ska Society is honoured to present this show to Vancouver and the rest of Western Canada.

Barrington Levy & Detour Posse will be joined by Vancouver's own The Ponderosas and DJ Scovie of Blacktusk Sound!

And if you want a double dose of Barrington Levy make sure you check him out at the Victoria Ska Festival with Fishbone the following evening at Ship Point Inner Harbour.

Called Reggae's "Mellow Canary" by virtue of his strong, pure vocal style, he's renowned as the first singer of the dancehall era, inspiring many imitators en-route. Barrington was born in West Kingston, but spent much of his youth in Clarendon, where he developed his signature reff by experimenting with different vocalizations and bouncing sounds... more info
Audio: Here I Come, 21 Girl Salute, Under Me Sensi

The Ponderosas take soul, r&b,reggae, and blend together in a musical blender until they’ve got everyone in the crowd moving and grooving to their festive and lively rhythms. this Vancouver eight-piece have worked with groups such as Natural Flavas, The Boom Booms, and Rude City Riot. Their infectious music is sure to start a dance party througho... more info
Videos: