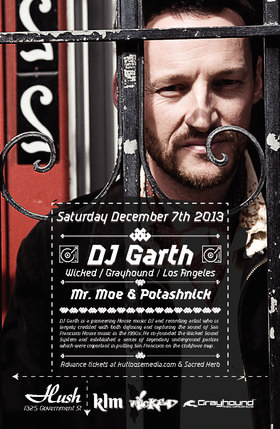 Music: Electronic / DJ
Before moving to Los Angeles in 2010, Garth spent two decades in San Francisco fanning the flames of conscious hell raising that existed there in generations past.

Parties with his stamp include his All Night Long Loft parties, a coveted ten year residency at Come Unity, over twenty legendary years with the Wicked Sound System and since 2004, Back2Back with right hand man Jeno. His sound is a definitive fusion of Acid House, Space Disco & Psyche Rock.

He is the only DJ ever invited to tour with DJ Harvey spending six weeks in 2011 touring Australia and Japan.

Garth has been voted amongst America's top DJs in Urb, XLR8R and DJ Magazines.

As well as producing more than fifty records on his Grayhound & Golden Goose labels, he can now add actor to his resume. His debut 'Speed Dragon' premiered at Cannes in 2013 and won best feature film at NY International Independent Film Festival.

with support from the 2ofHouse
Victoria's own
Mr.Moe the DJ and Solomon Potashnick

purchase tix at SACRED HERB in lower johnson or http://www.kutloosemedia.com/purchase