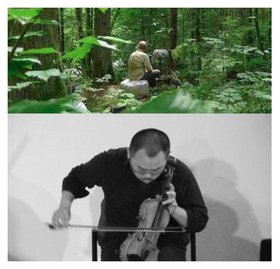 Music: Classical, Jazz / Blues
A Place to Listen is thrilled to announce our 12th concert, featuring a stunning pair of experimental chamber works by Wandelweiser composers Michael Pisaro and Johnny Chang Composer, pianist and A Place to Listen founder Daniel Brandes will be joined by saxophonist Erik Abbink, and composer/guitarist David Foley to present the stunningly transparent hinwandeln trio by Michael Pisaro (professor of Composition at CalArts). This concert will also feature the World Premiere of a new work for live instruments and field recordings by Berlin based composer and improviser Johnny Chang.

About A Place to Listen
More than a concert series, A Place to Listen is about creating a space. A quiet place where, for an hour or two, one can be deeply attuned to something. Nothing spectacular or sensational. Just some tones and some silence. In our current culture of hyper-stimulation and saturation—which attempts to colonize our imaginations and demands that we not look too closely, or feel too deeply— this kind of musical practice is, for me, essential. It feeds a part of us that, more and more, we are learning to neglect. The part that needs quiet. Rather than a concert series, this is a listening series.

Saxophonist Erik Abbink has performed as a chamber musician in Canada, the United States, the Netherlands, Germany, France, Poland and Turkey. He appeared for Sonic Boom Vancouver, The Netherland Wind Ensemble, Percussion Group The Hague, Aventa Ensemble, and Redshift. As an orchestral musician he appeared with the Rotterdam Philharmonic Orchestra,... more info
Submit info on this show to our admins