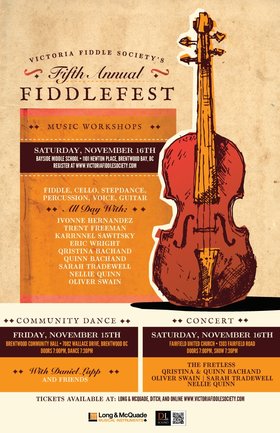 This is an all-star concert on Saturday, November 16th at Fairfield United Church (corner of Fairfield & Moss). The concert will feature the award winning bands The Fretless and Qristina and Quinn Bachand. Other concert performers include Victoria’s quintessential folk musician Oliver Swain, BC fiddle champion Sarah Tradewell and recently back from several years in the UK, Victoria fiddler Nellie Quinn.

Sarah is an energetic entertainer who enjoys performing a diverse mix of music, including Celtic fiddle, old time, country and classical. Sarah is available for dances, weddings, concerts, fundraisers, ensemble work, or anywhere else music is enjoyed. more info

other sites: myspace | sonicbids | cdbaby
Canadian fiddler Nellie Quinn is quickly gaining attention as an outstanding musician, captivating performer and versatile interpreter of Canadian traditional musics. At the age of 24, Nellie belies her young years through the depth and maturity of her music, no doubt a result of touring across Canada, the United States, and the United Kingdom. Bo... more info
Submit info on this show to our admins