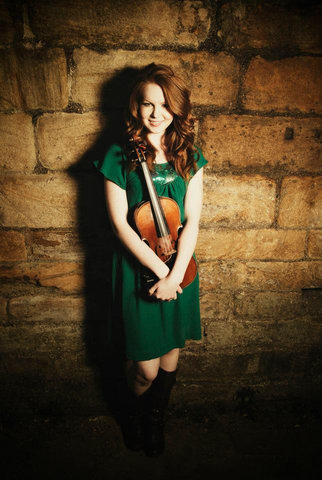 Canadian fiddler Nellie Quinn is quickly gaining attention as an outstanding musician, captivating performer and versatile interpreter of Canadian traditional musics. At the age of 24, Nellie belies her young years through the depth and maturity of her music, no doubt a result of touring across Canada, the United States, and the United Kingdom.
Born and raised in Victoria, British Columbia, she began playing music at the age of 9 and unlike most fiddlers, started playing violin an opposite way, or cross fiddle style as she is naturally left handed. After a few years of excelling at playing fiddle tunes left handed, she started to study classical music where it was recommended she switched to the conventional way of playing, right handed. Nellie studied classical music for 3 years before deciding to return to her first love, folk music.
Hailing from a musical family, Nellie inherited her great grandfather's fiddle on which she has explored and become proficient in many different genres of music, recording with Indie Band ‘Italian Edition’ and recording her original tunes and traditional folk music Nellie Quinn produced her first EP entitled ‘From Past to Present’. Nellie has played with many prestigious groups including the ‘British Columbia Fiddle Orchestra’ which performed for over 40,000 people at the Victoria Canada day celebrations. ‘Twisted String’; a string group formed by Juno-nominated composer Oliver Schroer as well as “Fiddle Band” from Newcastle University performing at Celtic Connections 2010 in Scotland. Most recently Nellie has toured the US & Canada with Celtic Rock band ‘The Town Pants’ summer 2014.
As an active musician in the folk scene, Nellie has had the great opportunity to compose, perform and study alongside some of the most influential fiddlers of today. She has performed on stage with such fiddlers as; Gordon Stobbe, Oliver Schroer, Daniel Lapp, Daniel Bernard Roumain (DBR), Ivonne Hernandez (The Fretless) and Catriona Macdonald to name but a few. Nellie spent 4 years performing, teaching and studying in Newcastle, UK which has also put her in high demand as a fiddle teacher. Nellie is currently base on the West Coast of Canada teaching fiddle lessons and touring full time.
Nellie has strong roots in Canadian folk music traditions such as Cape Breton, Quebecois, Métis (indigenous first people of Canada) and Old Time music. Through her understanding and awareness of all these genres she has developed and nurtured an individual style of playing which draws and shows respect for all these traditions whilst creating something vibrant, exciting and different. An evening of music from Nellie is an experience not be forgotten and is guaranteed to get your feet tapping.