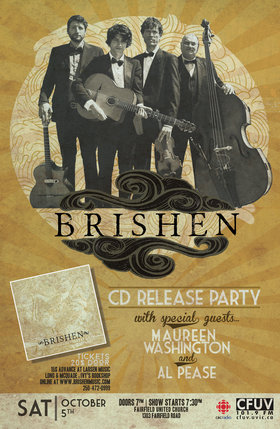 It'll be a swinging good time as Brishen performs all the songs from their brand new album, plus many more popular gypsy jazz standards.

Recorded, mixed and mastered by Grammy nominated producer Joby Baker (also co-producer of the album), the album features 14 tracks plus a surprise! Brishen's shows have all sold out, so to avoid disappointment be sure to get your tickets soon!

Or pick them up at any of the following outlets: Larsen Music, Long & McQuade and Ivy's Bookshop

Check us out at http://www.brishenmusic.com

With diverse musical talents and a bottomless pool of creativity, Quinn Bachand is recognized as the "Young Lion of the Celtic guitar" (Daniel Lapp) and "Canada's top Celtic guitarist" (Ashley MacIsaac). Although Quinn plays a range of styles that include jazz and bluegrass, it is his talents in the world of Celtic music that have drawn much attent... more info