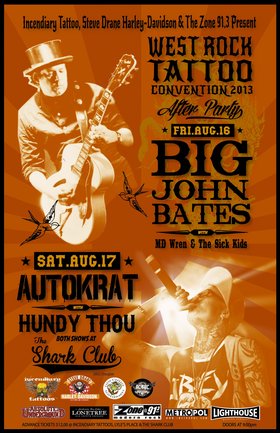 When Vancouver hip-hop is discussed or searched online, a name that is sure to come up is Autokrat. Since 2005 the female MC has consistently grabbed the attention of hip-hop fans wherever she appears, not only for the elaborate art that lines her body in ink, almost completely head-to-toe, but mostly ...for lyrical ability on any mic she touches.

Starting her career in Downtown Vancouver with rapper/producer Paper Chase and DJ QuiteFrankly, the three quickly gained popularity around town battling and rhyming outside of clubs. Soon enough they had their first show: opening for Coolio, an opportunity few receive with such a big name in their debut stage performance. Since then Autokrat has opened for some of raps biggest names ---- Snoop Dogg, Yelawolf,Swollen Members, Scarface, 2 Live Crew, Trina, Bubba Sparx, Lil Flip, and many, many more ---- as they stop in Vancouver on major tours. In the last few years she rocked the stage for over 10,000 spectators from the Shambhala festival's main stage and had the crowd eating out of her hands, toured parts of Canada while at the same time speaking in the towns she hit to teach hip hop workshops to troubled youth. As well as many other festivals, the Karvorka for instance, Krat has also stolen the show from artists she was scheduled to open for, Warren G and Lil' Kim to name a couple. Her stage show is polished and extremely entertaining, involving the crowd as much as possible and leaving the venue full of charged energy by the time she exits the stage.

Autokrat has released many songs throughout her career as an MC. In 2009 Dominus Monologue ---- the name that made up Krat, Paper Chase, and QuiteFrankly ---- released their debut self titled album. Autokrat has also appeared on songs with Vibesquad,Snak The Ripper, Domino Clique, OJ, and tons more local artists.Currently she is working on her solo album in Victoria, her new hometown since 2012.

Her style is hands down lyrical talent, mixing melody with multi-syllable rhymes that are littered with metaphors and lines you need to go back over to see the double meanings of. Unlike the herd of rappers today who think style is 90% of the game and work on that aspect to launch their career, Autokrat oozes style without having to think about it, so her energy is spent on her lyrics, which is why she is miles above the majority of her peers, worldwide.

other sites: tumblr
WE DON"T MAKE HITS! WE TAKE SHITS! more info
Submit info on this show to our admins