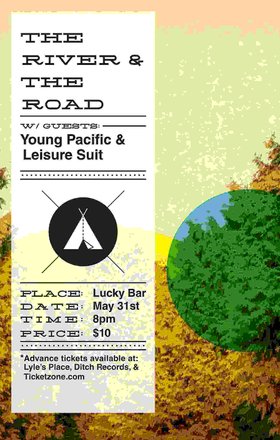 The River & The Road with special guests Young Pacific and Leisure Suit.

After crossing an ocean, leaving a hemisphere, and a long stint hitch hiking across the American Southwest, singer/guitarist Andrew Phelan made his way to Chicago with the looming need to cross into Canada for work. He had two flight choices—Montreal or Vancouver—and flying west was cheaper. Once there, he found a healthy contest in singer/banjo player Keenan Lawlor, who had been playing around Vancouver for the previous eight months. Keenan himself had moved from across the water to forge a new path, but in his case, it was the Georgia Straight instead of the Pacific Ocean. At first the two often butted heads, seeing in each other the greatest competition for the attention of East Vancouver’s open mic audience. Competition turned quickly to collaboration, busking, and living on scraps together to make their musical existence possible. After several months as a duo, and experimentation with additional instrumentation, they recorded their debut eponymous twelve-track album. In the spring of 2012, the band emerged as a dynamic four-piece with the addition of bassist John Hayes and drummer Cole George.

In their short history as a band, The River and The Road has blossomed from a busking duo to an internationally touring quartet. Winter 2013 saw the boys working to stitch their name into the musical fabric of Australia, most notably in Sydney and Melbourne. With a long list of dates behind them, and many new fans to show for it, the band is returning home to Vancouver. They are presently filling their summer calendar with North American festival and tour dates, with coast-to-coast aspirations.

Tenacity, heart, and above all else, a gripping live performance, the band has no plans of slowing down. A spirited folk form of sincere storytelling, mixed with strong harmonies, heavy percussion breakdowns, and dynamic arrangements, embodies the sound of The River and The Road.

Formed in 2009, Vancouver’s Young Pacific has shared the stage with Canadian favourites including the Arkells, the Zolas and Bend Sinister, to name a few. Working with producers Tom Dobrzanski & Elisa Paengsaeng (Monarch/Vertical) and Andrew Spindor & Will Watson (Habitat/Green Couch), Young Pacific has achieved spots on legendary stages including Live at Squamish, Rifflandia, and the Rio & Rickshaw Theatres. These enormous opportunities have established them as a fresh musical act with a solid fanbase and a constant desire to grow.

Building on echoes of Fleet Foxes, Tame Impala and The War on Drugs, Young Pacific strive to push pop music into undiscovered realms, leaving boundaries and rules behind in the static. It's a meticulously crafted, restless wash of colour, melody and lyricism that keeps musicians and non-musicians alike on the edge of their seats. Young Pacific takes you down the shape-shifting trails of psychedelia and prog, cradles you with intimate tales from folk’s familiar fires, surprises you with fervent dynamics, and makes you smile all at the end of it with a heavy dollop of unadulterated pop.

The River and The Road

Andrew Phelan and Keenan Lawlor had both only lived in Vancouver a few months before they met and began recording a full-length album together, self-titled The River and The Road, on a shoestring budget. The release of that album in the Spring of 2012, and the addition of drummer Cole George and bassist John Hayes confirmed the final lineup of The ... more info

Bringing together the distinct energy of the west coast with upbeat melody, Young Pacific captivates audiences with a distinct brand of indie pop. Their songs explode on stage as they combine with the bands high-energy presence to captivate audiences, and move them on the dance floor. Hailing from Coquitlam B.C. a cloudy suburb of Canada's west ... more info
Submit info on this show to our admins