It's Moka Only's home coming show! With a catalogue that is unmatched by many...

With a catalogue that is unmatched by many, Moka Only is often considered to be a pioneer and driving force behind Canadian West Coast hip hop, as well as an important component in popularizing the art of freestyling in Victoria and Vancouver. In the 13+ years since his debut, Moka Only has released more than 50 albums, both solo and collaborative. He records under a variety of aliases, with the most popular being Ron Contour, Flow Torch and The Durable Mammal. He has been a contributing member of numerous groups and collectives, including Perfect Strangers, Code Name: Scorpion, Cryptic Souls Crew, The Dominant Mammals, City Planners, Nowfolk and Swollen Members, along with many others. Amongst all of that, Moka has worked with underground hip hop heroes like J Dilla, Aceyalone, OH NO, MF Doom, Buck 65, K-Os, Sixtoo and more.

But it all began rather humbly in his hometown of Victoria, BC, where Moka Only discovered hip hop culture at an early age, starting out as a graffiti artist before switching to rhyming at house parties and freestyling anywhere and everywhere alongside partner K-Prevail (recording together as Splitsphere). In 1994, Moka made the move to San Diego in order to further his rap career, creating a number of connections that he would later use to his advantage. Upon moving back to Canada in 1995 and taking up residence in Vancouver, Moka met Mad Child, and along with K-Prevail, now just Prevail, the three emcees founded Swollen Members one night at a Denny's, with Moka coining their multiple meaning name. However, a group dynamic was not for Moka and he soon moved on to a solo career.

Kia Kadiri. Kia, a female hip-hop/R&B recording artist from Vancouver BC. I have been performing my music & teaching my craft at events, showcases, & festivals in Canada for almost 15 years.

One of the biggest highlights of her career include recording my debut record Feel This (Maximum/Universal), with some of the best musicians in Canada. This record was nominated for a West Coast Music Award, and features artists like Malcolm Jamal Warner & Killa Kella (UK Beat boxer), juno-award winning artist Brad Turner & countless other incredible musicians. Many of the songs from Feel This are featured in the first & 2nd season of the HBO hit series The L word, and are favorites of CBC radio.

Cold Residents was founded by Reflectionz and Aleph 1ne in early 2012. The Brand was originally created as a foundation for the duo, releasing songs for mix tapes such as "The All Love album" and "Pacific Pressure mix tape," as well as dropping their first single, entitled "Opening Doors." They have since expanded their roster, to include the creative and artistic prows of such artists as Ishkan, D.R.L.C.T.S, Tokin Blaq and Ashleigh Eymann. The Vision behind Cold Residents is to create a professional, authentic sound and an environment that promotes progressive artists.

Degree One has been an integral part of the cultivation of the Vancouver Island hip hop scene for over 20 years. After an early stint in breakdance crews in 1983/84, Degree's real foray into the scene was as an MC for Victoria’s first recognized Hip Hop Group ‘Sound Advice’ in 1989. He then branched out into other areas of the hip hop scene and started his radio career on air at CFUV 101.9 FM hosting ‘Spittin’ Rhymes’ hip hop mixshow in 1992. Through frequent trips to California Degree satisfied the urge to create a real hip hop concert scene on Vancouver Island by throwing his first show in 1998 with Abstract Rude. Flash forward to 2012, Degree is now known as Vancouver Island’s foremost hip hop concert promoter and he has had the great opportunity to work with tons of incredible acts. 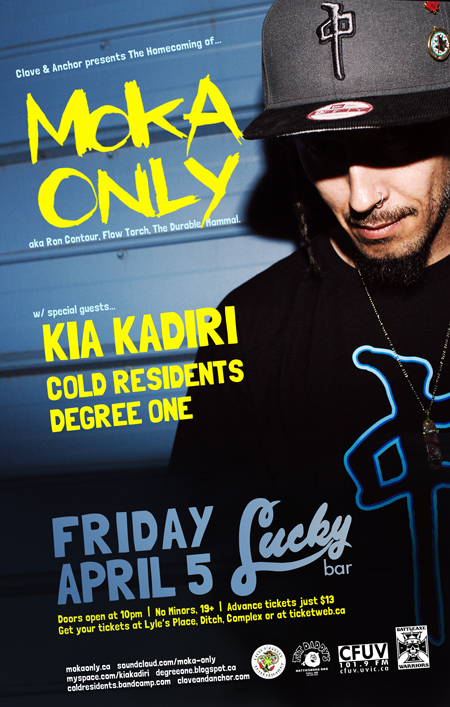