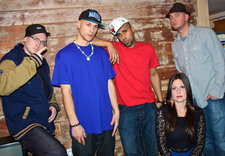 patrick
aleph1ne@gmail.com
250 213 4813
Contact Info
Past Shows (4)
In the era of hyper-stylized, over-produced watered down rap, its rare to find artists who embody the essence of the Hip-Hop culture that paved the way for the multi-billion dollar a year entity it is today. Even more rare is to find a collective of musicians who each represent the piece of the culture that inspires them so purely.
﻿
The Cold Residents are a group of like minded individuals, each with their own established presence in the west coast Hip-hop scene, and each the master of their own respective style. they have come together to create something bigger than themselves, a platform for them to breathe new life into the forgotten art or Hip-Hop.
﻿
At the helm is the prolific and extremely hard working Producer Aleph 1ne. The distinctive sound of Cold Residents, (dubbed innovated old school) because of its 90's era influence yet contemporary feel, laden with thick drums, raw baselines and intricately dissected samples, comes from Aleph 1ne and his impressive MV-8800.

To compliment the nostalgic sound he creates, every Cold Resident has a sound reminiscent of 90's era hip-hop while staying refreshingly original. Theres Reflectionz, The gateway to thought provoking hard hitting east coast lyrical complexity with a west coast slow flow delivery that captivates the mind while moving the body. Ashleigh Eymann is an accomplished singer/ songwriter/ pianist/ guitarist/ emcee/ snappy dresser who is as talented as she is charismatic and beautiful. Ishkan, the baritone voiced veteran of the crew is a legend in his own right. a pioneer of the west coast hip-hop scene with insightful, complex lyrics and unmistakeable vocal tone. Enoch Blaq also know as Tokin, is the hyperactive space case of the bunch who mixes wit and humor with existential, observational content. Finally, The DRLCTS the quirky madmen who's unconventional style and delivery changes your perspective while making you feel like you're in a strangely familiar place.
﻿
The love of hip-hop is a thread that connects the people who have found a piece of themselves in the music and the culture. A world of music dominated by greed, conceit and ignorance becomes a frustrating, cold , un-welcoming place for individuals still dedicated to to the art. So when you are lost, and the state of the music has left you feeling unwanted and alone, remember.......you are not alone......We are ALL Cold Residents
No audio samples have been linked to this profile.
No member roster has been entered (to link to musician profiles.)
Status: Unknown
Ready to go. - Last confirmed Mar. 1, 2013
Submit info on this band to our admins