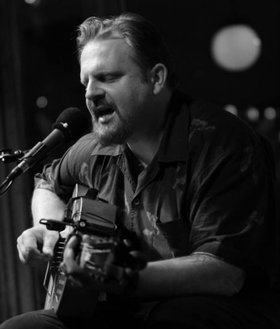 Bill Johnson was born into a musical and artistic family in Halifax, NS. Two years later the family moved to Ottawa, ON, and thanks to an older brother, the blues rang through the house. At the age of nine the family moved again to Victoria, BC. Now friendless, Bill began playing the guitar that year, and was the stand out guitarist in his class. He became obsessed with playing guitar and the sound of the blues. While other kids read comics, Chuck Berry was Bill’s Superman. By the age of fifteen he began a career as a professional guitarist. Many years would pass studying and gigging in smoky bars.

Superb bluesman, Donald Ray Johnson, began to use Bill on his recordings. Eventually even artists like the legendary Hubert Sumlin, Chess Record’s Cash McCall, and Alligator Record’s Son Seals, began to call on Bill when they needed a guitar player. By then Bill’s own band was doing well, releasing it’s first recording THE BILL JOHNSON BLUES BAND LIVE to warm reviews and even garnering Bill an MBA nomination for Best Guitarist. STILL BLUE, Bills third CD, was released on October 31, 2010, and everything came together at once in this recording. With Bill in full voice, his unique guitar tone, the songwriting, and the quality of the recording, STILL BLUE has been praised as one of the best contemporary blues recordings of this year.

As of February 2012, Still Blue has won two Blewzzy Awards, and been nominated for one Western Canada Music Award, three Maple Blues Awards, and made numerous "Best of 2012" music reviews, and lists world wide. Most recently, Still Blue was nominated for the 2012 Juno Award for "Blues Album of the Year", Canada's highest honor.

Bill Johnson has spent a lifetime immersing himself in the Blues. He’s a master of the form and live is a blast of majestic Blues power.