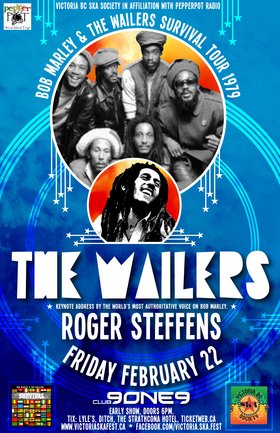 Music: Reggae / Ska / Dub
Friday, February 22nd, 2013 Victoria BC Ska Society and Pepperpot - Victoria's Hypest Caribbean Radio is proud to bring Victoria the band that has been carrying the Bob Marley torch since his untimely death in 1981. The Wailers are a reggae staple for any fan.

The history of the band during Marley’s lifetime is well known. Just to recap, their music has sold in excess of 250 million albums worldwide. In England alone, they’ve notched up over twenty chart hits, including seven Top 10 entries. This was no accident. Apart from Marley, the Wailers have performed with international acts such as Sting, Stevie Wonder, Carlos Santana, as well as reggae legends Peter Tosh, Bunny Wailer and Burning Spear. Their most recent collaborators include Kenny Chesney, Eve, Jason Mraz and Colbie Caillat. They’ve also completed innumerable tours over the years, playing to an estimated 24 million people across the globe, including groundbreaking performances in Africa and the Far East.

The anchor of the band is Aston “Family Man” Barrett, who in addition to being Marley’s most trusted lieutenant, played on countless other classic reggae hits throughout the seventies. The authenticity he brings to the Wailers’ sound is indisputable and yet today’s line-up combines old school know-how with lead vocals from one of Jamaica’s most exciting new singers.

Joining The Wailers will be Roger Steffens - one of the world's greatest reggae historians. This man has six rooms of his home in Los Angeles dedicated to archives, which include the world's largest collection of Bob Marley material. He will be giving a key-note address about the Survival Tour of 1979. Afterwards the band will perform the Survival album in its entirety.

Roger Steffens Without a doubt, Roger Steffens is the world's most authoritative voice on Bob Marley. Steffens accolades include actor, author, lecturer, photographer, editor and producer, but he will tell you that his greatest achievements came as a Reggae Archivist and Lecturer on the life of Bob Marley. It all started when Roger was blesse... more info
Submit info on this show to our admins