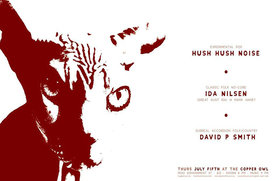 Music: Country / Bluegrass / Rockabilly, Electronic / DJ, Folk / Celtic / Latin / World, Pop / Rock / Indie
Hush Hush Noise: Hush Hush Noise is an experimental pop band from Victoria BC, who combine organic sounds with electronics to create memorable songs. “An ever changing creation of sound that wavers between the pit of your worst fears and the euphoria of love at its peak. Strange sounds and textures, sweet melodies, lush harmonies, shimmering guitars, big beats, chaos and beauty.” Lily Fawn has an unconventional songwriting style that’s like storytelling set to music. She sings both through her voice and her musical saw, a most serene and enchanting sound. She also emboldens Hush Hush Noise’s rhythmic assault with drums of all variety. Eric Hogg has been recording, playing guitar and writing songs since age 10. His experience making noise and electronic music has left an indelible impact on his approach to pop music.
https://www.hushhushnoise.com

Ida Nilsen: Victoria native Ida Nilsen is a Canadian pianist, singer and songwriter. She led the band “Great Aunt Ida” from 2002 until 2013, releasing three albums of original material. Influenced by classic songs from a variety of genres, her writing has been called intimate and honest, warm and spare, and bordering on misanthropic. She has been a collaborative member of the bands the Beans, the Violet Archers, the Buttless Chaps, Cunt, and has shared the stage with the Waterboys, the Weakerthans, the Rheostatics, Sarah Harmer, Veda Hille and others.
https://soundcloud.com/great-aunt-ida
https://www.facebook.com/Great-Aunt-Ida-251002627162/

David P Smith: Victoria, BC songwriter David P. Smith has been writing, performing, and recording since 1995. He is essentially a storyteller, his narratives visceral, sometimes hilarious, peering into darkness, stumbling into surreality, lurching back into the everyday, and occupying that honest spot where good C&W dwells. Musically and sonically he draws on everything from the raw emotion of hard-core country and rhythm and blues, to noise, to folk, to the forms dictated or suggested or discovered on the accordion or piano.
http://www.davidpsmithmusic.ca

other sites: hushhushnoise
Bio: An ever changing creation of sound that wavers between the pit of your worst fears and the euphoria of love at its peak. Hush Hush Noise is an experimental indie band from Victoria BC, who combine organic sounds with electronics to create engaging, memorable songs. Hush Hush Noise is: Lily Fawn - Lily has an unconventional songwriting st... more info
Audio: Longway, Hunter, Masochistic Love
Articles: The Zone's Band Of The Month