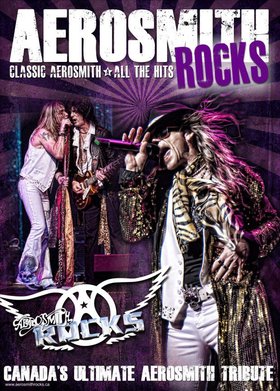 Music: Tribute / Cover
On November 10th, 2012, Aerosmith Rocks will be performing at The Mary Winpsere Centers' Charlie White Theatre in Sidney, BC. The event is also being filmed in full HD as part of an international promotional video release.

This event also follows the highly anticipated release of Areosmith's new album, "Music From Another Dimension" on Nov. 6th. The release marks the band's 15th studio album and their first studio collection of all-new material in 11 years!

We'll be celebrating the release of "Music From Another Dimension" with a listening party of the new CD & video(s), plus a few special surprises for fans in attendance.

other sites: aerosmithrocks | myspace
AEROSMITH IS ONE OF ROCK AND ROLL HISTORY'S MOST RECOGNIZED, IDOLIZED, AND ALSO MOST COVERED BANDS. WHEN EXAMINING A BAND THAT GRABBED THE TERM "ROCK N' ROLL" BY THE BALLS AND SHOOK OUT HIT AFTER HIT WHILE DEFINING THE WAY THE PUBLIC WOULD PERCEIVE ROCK STARDOM more info
Audio: Back In The Saddle, Eat The Rich, Last Child
Submit info on this show to our admins