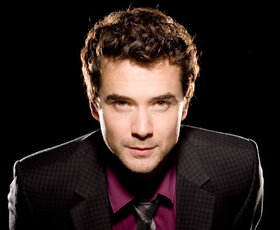 Michael Kaeshammer is one of the most entertaining and rhythmically infectious boogie-woogie pianists and vocalists on this planet. This combination has earned this Canadian musician international critical acclaim and a loyal and growing fan base. Michael’s recent release of the DVD “KAESHAM-MERLIVE!” had earned him his latest Juno nomination: “Best DVD Of The Year.” After meeting New Orleans R&B legend Allen Toussaint at numerous festivals where both performers were featured over the years, Michael decided to take his band into the studio last December to record a tribute album to Toussaint. The CD, entitled "Touch Of Love," will be released just prior to his TD JazzFest performance. His performance at the VJS fundraiser this past December left people dancing out the doorway, and this performance will do no less. Helping him debut material from his new album at this year’s TD JazzFest will be his regular rhythm section of his drums and Marc Rogers bass. For this gig, he will be joined by a horn section that includes Nick La Riviere trombone, William Sperandei trumpet and Steve Hilliam tenor saxophone

Michael Kaeshammer is a charismatic piano superstar and performer who is looking more and more like his generation’s Harry Connick Jr. His 2003 CD Strut saw him absorbing funk-inspired bebop, romantic ballads and modern jazz into his sound of traditional piano stylings, at the same time as he emerged as a soulful and convincing vocalist. His 2007... more info
Submit info on this show to our admins