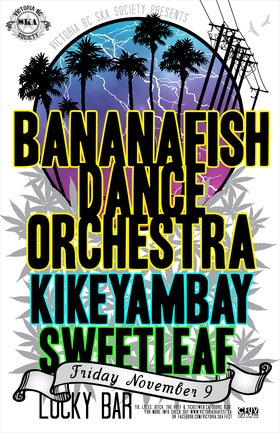 This show is in honour of Bananafish Dance Orchestra's brand new full length album. Bananafish Dance Orchestra (based in Nanaimo) have continued to gain success on and off the Island over the past three years. The band has played at several major festivals including Kaslo Jazz Festival, Vancouver Island Music Fest, Victoria Jazz Fest and ofcourse the Victoria Ska Festival where they had the honour of supporting Toots and the Maytals on the Ska Fest's Kick Off show! The energy the band brings to the people is undeniable so there's a good chance you'll be drenched with sweat after seeing them.

Sweet Leaf are Victoria's newest ska band on the scene. Led by Chris Jones of Crude Cultura fame Sweet Leaf bring quicker offbeats and music to sweat to. For this show the band will be presenting some fresh material and a couple new members.

Kikeyambay is a Victoria, British Columbia-based musical project led by Guinean percussionist and vocalist Alseny Michel Diallo, and often joined by world-renowned dancer and singer N’nato Camara. Diallo’s passion for and knowledge of both traditional and modern Guinean music has inspired a group of Victoria musicians to create a project tha... more info