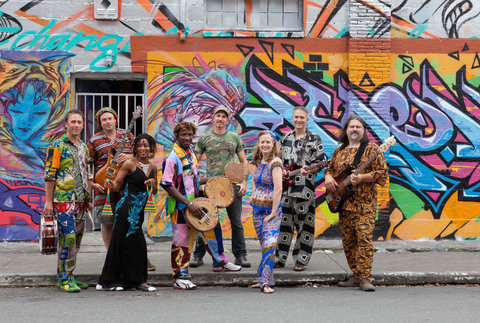 Diallo’s passion for and knowledge of both traditional and modern Guinean music has inspired a group of Victoria musicians to create a project that performs as either a traditional drum and dance troupe or a modern and dynamic Afro-fusion electric band.

As a traditional drum and dance project, Kikeyambay honours the ancestral cultural traditions of the Malinké and Susu people of Guinea and performs in schools across British Columbia. through Artstarts, a not-for-profit organization that brings professional artists into BC schools.

As an electric band, Kikeyambay’s upbeat blend of West African, Zimbabwean, reggae, hip hop, jazz, gospel, and soul music always gets people on the dance floor! Kikeyambay has headlined at the Seattle World Rhythm Festival, Edge of the World Music Festival in Haida Gwaii, and the Diversity Festival on Texada Island, as well as many other festivals and venues.

Diallo has a gift for teaching and sharing the rhythms of his culture and is considered one of the best djembé players in Canada. With Kikeyambay , he offers audiences a chance to dance, be joyful and revel in the African way of music as a vital and fundamental part of everyday life
No audio samples have been linked to this profile.
No member roster has been entered (to link to musician profiles.)
Status: Unknown
Kikeyambay is available for 2014 gigs on Vancouver Island or elsewhere in BC/Canada - Last confirmed Dec. 29, 2013
Submit info on this band to our admins