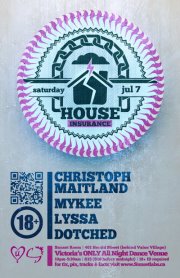 A very serious night of house flavours from 4 very serious artists who quite seriously are ready to have you seriously consider getting HOUSE INSURANCE. Did you leave the curling iron on after dolling up? Or perhaps left the dryer going now that your best shirt is wrinkle free? Is the bathtub overflowing cuz you were in a hurry to get to the dance floor? Or did you forget to turn down the heat after deciding you needed to warm up for a night on the town? Maybe there's a tripping hazard at the front door because all your best shoes are piled high after you tried them all on?

If your dancing needs are a constant danger to yourself and others,
you need HOUSE INSURANCE. Come get yours tonight.


CHRISTOPH MAITLAND :: Sunset Labs | Victoria http://www.sunsetlabs.ca/christophmaitland
A decade of DJing in Victoria has seen Christoph Maitland evolve from one of the Premier Djs in Canada to a hot up and coming producer. Winning the Hush Night Club (www.hushnightclub.ca) DJ Competition in 2002 would lead to Christoph being resident at Canada’s longest running club night institution, Lush. Playing weekly alongside the world’s biggest names Christoph’s mix of grindy electro, pumpin house, progressive and futuristic breaks radiated with audiences. A true performer Christoph knows how to work his audience into a fever pitch with his immaculate mixing skills, energy and outright enthusiasm for great dance music! Not only is he one of Canada’s hottest DJs, he is also billed as being one of the hottest up and coming producers to watch in the industry. Calling Pop & Lock Records (run by Canadian Breaks star Myagi) home he has recently seen success getting plays by Annie Nightengale on BBC radio 1, being remixed by Alex Mind, Toby Emerson, Quadrat Beat, Farace, Run Riot and more. Exciting new and up and coming projects include remixes for Lazy Rich’s Big Fish Recordings and UK’s formidable breaks player, Dead Famous Recordings.

MYKEE :: Reliable, Hush | Victoria
http://www.myspace.com/reliablemike
A veteran DJ of more than 10 years and longstanding successful promoter in the Vancouver Island dance community, Mykee is one of the island's most versatile and in demand artists. Through his promotion company Reliable Productions, Mykee has contributed to some of the largest and most memorable parties and DJ sets in the island's history. Packing dance floors across Vancouver Island for a decade with his high octane DJ sets and versatile musical interests, Mykee's technical skill and ability to keep the listener guessing are all part of what makes Mykee Vancouver Island's #1 Party Rocker!

LYSSA :: Sunset Labs | Victoria http://www.sunsetlabs.ca/lyssa
Alissa is passionate about art, cooking, clothing & costume design, music & dancing. As “Neon Sally,” she spent many sleepless nights dancing all over the interior of BC & under the stars at the Shambhala Music Festival to her favorite DJs. Alissa’s first appearance as DJ “Lyssa” took place in 2005. Having spent 11 years in Mexico, and being fortunate enough to be exposed to Latin culture, she has a strong desire to explore her roots in her musical selections. Depending on what mood we catch her in, hot summer afternoons call for deep sexy Chicago beats and bouncy latin-infused house, and on colder nights, expect anything from dirty deep organic tribal tech to quirky & fun latin tech house. She made Victoria her home in spring 2007. She has had the privilege of performing at summer festivals like Victoria Electronic Music Festival, Entheos Gathering, Uprising Media Festival and Solaris Music Festival. She has been added to Sunset Labs roster, and performs at some of the city’s coolest rooms & clubs, like Sunset Room, Hush, & Base Lounge.

DOTCHED :: Sunset Labs, ControlFreqRadio | Victoria
http://www.sunsetlabs.ca/cityof9s | http://controlfreqradio.com/
Dotched love of electronica was fueled growing up in Saskatchewan and regularly attending Connect Festival and Galaxy Lounge nights hosted by Dekoze & Dr.J. After moving to Victoria he helped found a popular community radio show on CFUV called Really Good Music along with Rave Victoria originator Davin Greenwell/ariz0na. The show soon went to commercial airwaves on extreme 107.3 where it hosted the likes of John Digweed, Timo Maas, Moby, Hybrid, Paul Van Dyk and Tiesto. This played a part in his becoming an early host and contributor to the Victoria Electronic Festival. Dotched has always played an eclectic mix of music, from house & progressive, moving into techhouse and techno and now playing a blend of French Electro, Techno and Nu-Disco! Prepare to rediscover this long-time Victoria beatmaker.

Mykee has been pleasing the crowds over the last few years with his wide variety of party music. He's played along such greats as Deko-Ze, Max Graham, Dr. Trance, Oscure, Mac Zimms, and DJ Brian. He shows his great love for the music every time he spins out, but if you ask him, his enthusiasm comes from the people he plays in front of. "It's all ab... more info
Submit info on this show to our admins