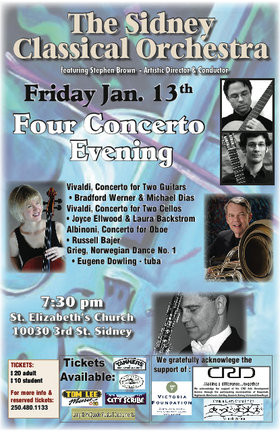 Most classical music concerts feature one soloist, perhaps two. This one has six! An obscure duo guitar concerto (Bradford Werner and Michael Dias - guitars) of Vivaldi, originally written for mandolins, will be featured side by side with his popular duo cello concerto (Joyce Ellwood and Laura Backstrom - cellos). Also, Russell Bajer - oboe, will perform a Albinoni concert which is one of the Baroque gems. Eugene Dowling - tuba, whose recording The English Tuba on the Fanfare/Pro Arte label was nominated for a Juno Award, will round off the programme with one of Grieg's Norwegian Dances arranged for tuba and orchestra. The final piece of the evening, Ennio Morricone's, Gabriels Oboe, from the movie The Mission, has been especially arranged for this concert and will include all the soloists and the orchestra.

The Sidney Classical Orchestra (SCO) is a professional chamber orchestra based in Sidney, BC. The SCO, under the direction of Stephen Brown, performs four times a year at St. Elizabeth's Catholic Church. more info

Stephen Brown sings roots jazz, country, blues, folk, and rock, accompanying himself on the piano and guitar. more info
Audio: The Cabbage Song
Submit info on this show to our admins