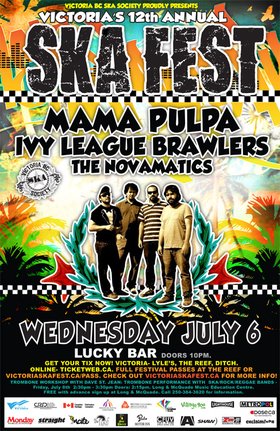 Music: Folk / Celtic / Latin / World, Funk / R&B, Jazz / Blues, Pop / Rock / Indie, Punk / Metal / Hardcore, Reggae / Ska / Dub
This show has a special connection to our ska scene province wide. Mama Pulpa have had a close connection to Victoria's Annual Ska Festival since their first appearance in 2008 when they played with platinum selling Inspector and Vancouver's ska powerhouse Los Furios. Touring with Victoria and Vancouver bands in the past two years in their own country, Mama Pulpa are back again for a second helping. Mama Pulpa will be playing at this year's festival alongside Vancouver's 9 piece party ska fiends Ivy League Brawlers and Victoria's own Everybody Left.

MAMA PULPA formed in the summer of 1996. It´s members met at a pizza parlor where a pizza-eating contest was being held, the first prize being an electric guitar. Apparently none of them won, but they´ve been inseparable since. As any band starting out, they began playing in small time venues, slowly developing a faithful following of fans,... more info
Audio: Que Mal Gusto, Robot