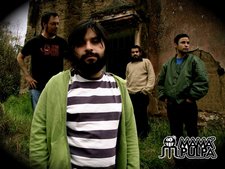 Event Photo Galleries (3)
MAMA PULPA formed in the summer of 1996.

It´s members met at a pizza parlor where a pizza-eating contest was being held, the first prize being an electric guitar. Apparently none of them won, but they´ve been inseparable since.

As any band starting out, they began playing in small time venues, slowly developing a faithful following of fans, who slowly (and faithfully) stopped following them. Their songs were not liked, and gigs dried up.

The band decided to abandon the project, playing a farewell show in the hippie town of Tepoztlan, a small population 35 miles south of Mexico City, where UFO sightings are commonplace.

While driving there, right when they were passing an unpopulated spot, the car in which they were travelling stopped, for no apparent reason. As the four bandmembers checked the car to find the cause of the breakdown, an intense white light shined from above, knocking them unconscious. They report being teletransported into a spaceship, where they were met by extraterrestrial beings, who shared their civilization’s musical knowledge with them, before returning them to the dark, isolated highway.

When they finally reached Tepoztlan, they went onstage and, as if by magic, played songs they had never played before.

“It was as if we had actually written those songs, and rehearsed them for years” stated the group in an interview for the local newspaper, él Sol de Tepoztlan (The Tepoztlan Sun).
The show had an unprecedented success and, coincidentally, among the audience was an important Sony-BMG A&R executive.

He immediately took the band into a recording studio; the result from this paranormal experience is Mama Pulpa’s phonographic debut, él Mundo es muy Dificil (The World is so Hard).

Worthy of mention is the fact that it took four years to complete the album; they asses that during that time, the band kept contact with the alien visitors, and it was they who supervised every detail of the recording process: “It was difficult to understand them at first, as they do not speak our language. Around the same time they would send tons of corrections, but fortunately Hans (the producer) and I managed to capture the essence of what they were aiming for” said lead singer Alfredo in an article for The National Enquirer.
The album enjoyed excellent reviews, which led to a succesful, nationwide tour. Some think such achievements are also due to the alien abduction.

View all tracks for this artist (2)
No member roster has been entered (to link to musician profiles.)
Status: Unknown
- Last confirmed Jun. 24, 2008
Submit info on this band to our admins