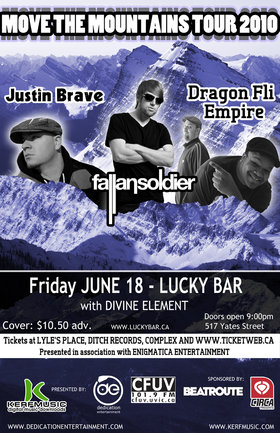 
Get ready to enjoy a night full of the grooviest hip hop, funk/jazz you've heard in awhile when the Moving the Mountains Tour touches down in Victoria. Enjoy some of the finest hip hop in Canada with Calgary's Dragon Fli Empire, Justin Brave aka Just-B (formerly from Victoria), Fallan Soldier, & Cypher's Divine Element.

Heralded over time as one of Western Canada’s leading hip hop voices, Justin Brave’s goal of creating conscious, quality music has never wavered. From paying his dues streetwise in countless freestyle battles to collaborations with the likes of the Lifesavas, DJ Vadim, Swollen Members and Moka Only, Justin has proven his ability through and thr... more info

Harris Allan is Fallan Soldier, “an exemplary singer-songwriter…specializing in hard-hitting beats and genre-mixing tracks…with inventive lyrics and unique vocals” (AnE Vibe). His debut album “Above The Call Of Duty” is “fresh, upbeat and exceptional…Overall, a great piece of work” (NXEW). “If you haven’t heard of Fallan So... more info

The Mission: To spark presence in peoples hearts and wake up the consciousness of the planet thru attracting positive energy to fight war with words and not physical or conceited violence. The Vision: Create a framework for inspiring artists to share and promote their sparks of consciousness. Open up an area for online users to discuss through musi... more info
Submit info on this show to our admins