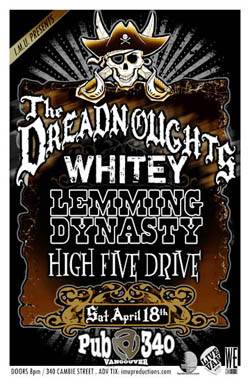 WHITEY ignores boundaries and reservations, delivering a songwriting approach that has been described as "anything goes!" Bringing a little bit of everything to their sound: ska, metal, rock and even a touch of ballads to their energized live shows, the band has toured from coast to coast, playing in every type of venue from bakeries to haylofts, from middle school gyms to unforgettable Lions/Kinsmen Hall punk shows with such artists as DOA, The Tea Party, Stabilo and Holly McNarland. ttp://www.myspace.com/whiteycanada

The DREADNOUGHTS - Experience ball-busting Celt-punk from Vancouver's beloved group of drunken misfits with a pint of pirate-shanty, a shot of Irish melody and a triple-chaser of street punk. The result is a powerful live sound with whirling fiddles, mandolins and accordions inviting you into a world of drink and debauchery. Storytelling lyrics sung with fiery urgency blur the lines between contemporary songs and traditional tunes, possessing all the confidence and muscle of a seasoned outfit in the prime of their career. Imagine Rancid had their tour bus hijacked by a group of inebriated gypsies and you're beginning to understand... be sure to come out and catch these young up-and-comers who opened for The Real McKenzies! http://www.myspace.com/vancitydreadnoughts

LEMMING DYNASTY isn't afraid to punctuate their craft with tight arrangements, searing harmonies and riff-heavy bottom grooves. Slick grooves sauced in social outrage meet haunting melodies peppered with a sly irony reminiscent of times when leaving a little to the imagination was as classy as it is classic. One hears elements of grimy '70s funk, dirty grunge, electro punk and progressive jazz. In an era where retro is getting old again and dusty tracksuits grace the covers of sarcastic new wave magazine covers, Lemming Dynasty are out to create the very thing that seduced them in the first place - great rock songs. http://www.myspace.com/lemmingdynasty

A Vancouver institution, THE DREADNOUGHTS are a roaring sea shanty, wrapped up in folk melody and powered by an old-school street punk aesthetic. The Dreadnoughts lay down furiously energetic yet highly melodic punk music that has kept them atop of the west coast punk scene for more than a decade. Self-described as “Vancouver's biggest, baddest, ... more info
Audio: The West Country

Not many bands can get the good vibes rolling the same way that Vancouver’s Whitey does it. Their music is like a funkin’ rockin’ latin-jazz dance party from outer space. If it’ll make your body move, Whitey will play it. Sporting some of mainland BC’s most talented and sought-after musicians, Whitey’s members can also be found melting ... more info

LEMMING DYNASTY isn't afraid to punctuate their craft with tight arrangements, searing harmonies and riff-heavy bottom grooves. Slick grooves sauced in social outrage meet haunting melodies peppered with a sly irony reminiscent of times when leaving a little to the imagination was as classy as it is classic. One hears elements of grimy '70s funk, d... more info

"Jaw dropping super fast, techincal punk with good melodies. I haven't been this impressed by a show since the first time I saw Choke live." - Nev Gibson, ScenePages.com more info
Submit info on this show to our admins