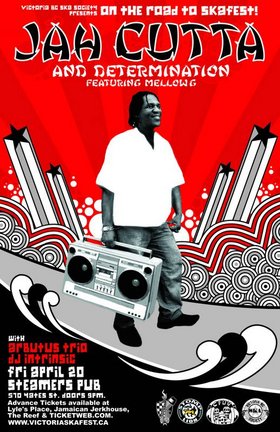 Music: Pop / Rock / Indie, Reggae / Ska / Dub
Jah Cutta and the Determination have been around for over 20 years but it's just recently they've decided to start touring again. Jah Cutta resides in Montreal. He has shared the stage with artists such as Peter Tosh, The Wailers, Gregory Issac and Buju Banton. He'll be joined by Mellow G talented singer and chanter. The duo singer/MCs work together like milk & honey.

ARBUTUS TRIO are pumped to play this show fresh from their national tour. Arbutus Trio have been steadily increasing their profile around Victoria & Islands, Vancouver and the rest of BC since the spring of 2006. They recently were support for La Severa Matacera (Bogota, Columbia), Chris Murray (LA) & The Toasters (NYC) on three separate bills.

Their new tracks make solid listening material and give reggae dub lovers something exciting to talk about.


Tickets at Lyle's Place, Jamaican Jerkhouse, The Reef and Ticketweb.com

we used to play reggaedub. we used to be called Arbutus Trio, we changed. we play rock. with a tinge of punk. local grown. not hippies. good beards. more info

Intrinsic has been collecting and playing records for over 13 years, and his musical tastes span nearly the whole globe of underground music. He is often found blending funk and reggae break beats, culture reggae, dub, trip hop, ethno, latin, minimal & detroit techno, idm, electro and house. A long time staple in the downtempo scene of Victoria, he... more info
Submit info on this show to our admins