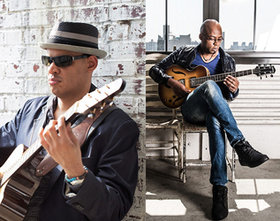 Music: Jazz / Blues
Raul Midón has recorded 10 CDs and earned Grammy nominations for “Best Jazz Vocal Album” three years in a row, from 2017 to 2019. Midón last appeared at TD JazzFest in 2010, and has collaborated with such icons as Herbie Hancock, Stevie Wonder and Queen Latifah. Midón sings with a soulful tenor voice and plays guitar in a way that can hold any audience in thrall.
Hailed by Sting as “one of the most inspiring musicians on our planet today”, Benin-based guitarist Lionel Loueke plays a dazzling combination of African folk roots and contemporary jazz, and was last seen in Victoria at the 2013 TD JazzFest as a decade-long member of Herbie Hancock’s band. These virtuosos will perform separately, then combine forces as an unforgettable duo.
Closing the evening, CBC’s Saturday Night Jazz host and JUNO winner Laila Biali performs hits from her 2018 self-titled CD and crafts a uniquely catchy and sophisticated jazz-pop sound. Don’t miss this perfect twin bill of both great guitarists and evocative singer-songwriters!

Singer, pianist, arranger Laila Biali is truly a triple threat. She has generated a huge buzz on the Canadian music scene since her 2007 CD from sea to sky, which garnered four and five star reviews. From her artfully penned original compositions to her inventive arrangements of standards, the music she creates reveals a brilliant musical mind and ... more info
Submit info on this show to our admins