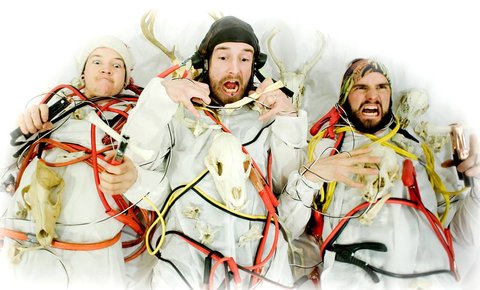 Tim
booking@ninjaspy.net
Contact Info
Past Shows (103)
BC’s Ninja Spy are a devilish mix of ska, metal, and funk. Their sound is totally their own and lay siege wherever they play. They’ve performed with an eclectic mix of artists ranging from Los Furios, Gross Misconduct, and The Dreadnoughts. Come see what all of the buzz is about and witness these Coquitlam natives in action.

Ninjaspy arose with the dawn of the year of six, embodied by the Triad in Blood: Joel, Adam And Tim. They have risen above the mire of their faceless six year muse and focused their sights on the mission objectives at hand: Swift, surgical amalgamation of a spectrum of styles, eradication of narrow mindedness, enablement of total freedom of expression and covert infiltration of every earthen sinew in their chosen path in order to facilitate real connections with others; Interactions that are the life blood of a meaningful human existence. In constant raging battle with the Triad of MI (Monotony / Indifference. Malice / Intolerance. Materialism / Ignorance) and in conflict withthe skank; the vicious relentless evil that lives in every human being, corrupting us from within and keeping is docile, negative, greedy, spiteful and miserable. It is the sworn duty of all Ninjaspy to throw the skank down until death...
No audio samples have been linked to this profile.

Status: Unknown
- Last confirmed Mar. 7, 2014
Submit info on this band to our admins