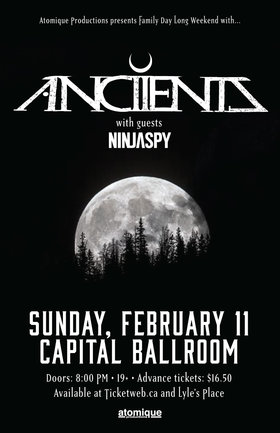 ANCIIENTS have combined fuck-off-huge chords with mind-altering riffage that takes you on an unfamiliar trip. Their eponymous debut (available as a free download via bandcamp) reeks of colossal harmonies, shattering rhythm sections and distinct, powerful vocals.

This quartet—made up of: Kenny Cook (Lead Vocals, Guitars), Chris Dyck (Guitar and Vocals), Aaron “Boon” Gustafson (Bass) and Mike Hannay (Drums)—started as the brainchild of Cook, hoping to find a more creative outlet for his music. Fully realized once Cook and Dyck’s creative efforts were combined, the band’s line-up solidified and ANCIIENTS released its self-titled EP engineered by Shawn Penner and mastered by Stu Mckillop.

Fast forward a handful of impressive shows and praises in local music rags, we now find the group preparing their full length album with help of Jesse Gander at the Hive Studios.
What to expect from the band’s next release? More of the same hard-hitting, meticulously-crafted riffs laced in pungent metal glory. The Hashes of the Pharaohs continue to burn as ANCIIENTS revels in its mysterious power.

other sites: cbc | myspace
BC’s Ninja Spy are a devilish mix of ska, metal, and funk. Their sound is totally their own and lay siege wherever they play. They’ve performed with an eclectic mix of artists ranging from Los Furios, Gross Misconduct, and The Dreadnoughts. Come see what all of the buzz is about and witness these Coquitlam natives in action. Ninjaspy arose w... more info

other sites: [email protected]
Power trio from Victoria. Fuzzed out riffs and gravel vocals more info
Submit info on this show to our admins