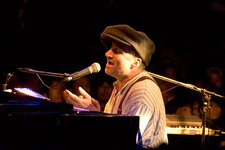 "Jon Cleary is the ninth wonder in the world." -Bonnie Raitt
New Orleans’ Jon Cleary is a triple threat - with a salty-sweet voice, masterful piano skills, and a knack for stacking infectious grooves with melodic hooks and sharp lyrics. Cleary is a man you can judge by the company that he keeps. When he isn’t putting on marathon late-night shows for his devoted hometown fans either solo or with his band, the Absolute Monster Gentleman, Cleary is invariably lending his intuitive touch to projects from the likes of B.B. King, Taj Mahal and Bonnie Raitt. He’s a member (since 1998) of Bonnie Raitt’s touring band, wrote songs for and played with Taj Mahal’s Phantom Blues and Señor Blues while gigging in Taj’s band, and played on B.B. King’s star studded Deuces Wild album. He last appeared in Victoria at the TD JazzFest in 2010 as a featured member of John Scofield’s Piety Street Band.

Jon Cleary first heard the timeless sounds of legends such as Professor Longhair and Smiley Lewis growing up in England, and after playing guitar in a succession of blues bands, journeyed to visit New Orleans when he was 17. He landed a gig painting the legendary Maple Leaf Bar, the second home of brilliant New Orleans keyboardist James Booker. Cleary took up the piano, and had a front-row seat for performances by Booker and New Orleans R&B pioneers such as Earl King and Huey “Piano” Smith. The die was cast, and after a brief period back in London, Cleary packed his bags again for the Crescent City, this time for good. He quickly established a reputation as one of the city’s finest practitioners of New Orleans piano, filling the piano chair in New Orleans legend Walter “Wolfman” Washington’s band.

Cleary has released four CDs under his own name beginning with 1994’s Alligator Lips and Dirty Rice to 2008’s Mo Hippa. When Jon Cleary sits down at the piano he’ll show us just how those famous New Orleans’ piano riffs and funky rhythms work. “I haven’t heard anybody close to having absorbed so much funk and so many subtleties of the different genius piano players and rhythms of New Orleans.” --Jazziz Magazine