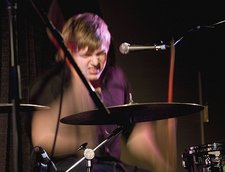 I've been privileged to share the stage and studio with some fantastic musicians including:

Numerous appearances on Canadian and US entertainment news.


If you need drum tracks for your album, but don't have the facility/finances to record them, I can help you out. I offer remote sessions from my studio in Victoria, BC to anywhere in the world you can get internet! We have a large live room with brick walls and wood floors/ceilings, all class A preamps, (API, Universal Audio, Focusrite, ect.) and a variety of drum kits, snares, and cymbals to provide almost any sound you want. We can video chat while the session is happening to ensure your drum tracks turn out exactly as you want them. Save a substantial amount of money versus the cost of renting a studio, hiring a drummer, and paying a producer and engineer. Please contact me at my email listed above for pricing.