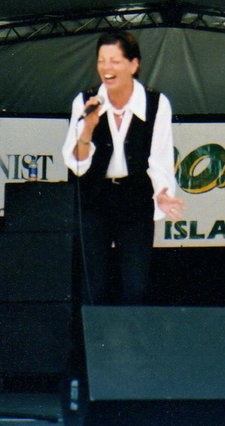 Sue carries the music genes of her father (boogie woogie piano player) and grandfather (played with Louis Armstrong). A native of Victoria, Sue played guitar, bass, and sang, variously, with 70s and 80s rock bands Impact, Night Flight, and The Industrials. During this period, she was nominated for a CARAS "Best Female Vocalist" award.

In 1988, after moving to Vancouver, she became the lead singer for the original, alternative rock band, The Fault. Influenced by Patti Smith, Billie Holiday, Bowie, Concrete Blonde, and other strong, edgy performers, Sue added her own songs (notably Downtown, People in Boxes, and Wrong House of Love) to the mix, helping the band reach new audiences in clubs and bars and and on the radio.

After the band broke up in 1991, She and Fault keyboardist Mark Reed, formed U.N.I. and released a cassette album on the Poolwest Label. A highlight of the album is a song in which Sue and Mark share singing duties with guest Paul Hyde (Payola$). U.N.I. dissolved a year later but reconstituted in 1999 after Sue and Mark worked together on a musical theatre production (Sue's idea) about Judy Garland and Liza Minnelli, at Victoria's McPherson Playhouse. Sue's powerhouse vocals and her striking resemblance to Liza, stunned the audience.

With big 'show' tunes added to their repertoire, Sue and Mark, as U.N.I., performed in Victoria clubs and bars and for seniors in care facilities and residential centres. In 2001, Sue and Mark amicably dissolved U.N.I. to pursue separate interests.