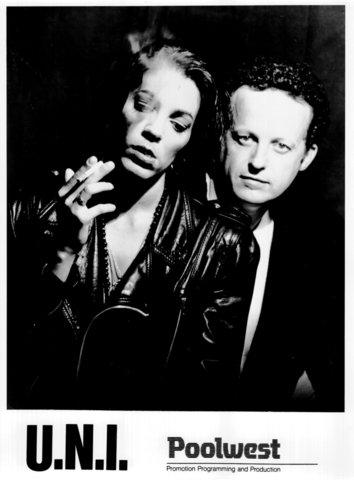 Mark Reed
info@bigspeck.ca
250-477-7138
Contact Info
U.N.I was a duo, a la Eurythmics, comprising Sue Baim (lead vocals, guitar) and Mark Reed (piano, keyboards). Both are former members of the Vancouver original alternative band, The Fault which broke up in 1991. U.N.I completed, in cassette form and on the Poolwest label, the recording project that The Fault was working on with Paul Hyde as co-producer, when The Fault broke up. Paul kindly contributed a guest vocal track to the U.N.I album. Former Fault bassist Rob Marr played throughout and the album is rich with other guest performers.

Though the release generated some airplay, U.N.I soon dropped from sight without having performed live - until re-emerging in 1999 in Victoria. There, Sue and Mark worked together on a musical theatre production (Sue's idea) about Judy Garland and Liza Minnelli, at the McPherson Playhouse. Sue sang and portrayed Liza and Mark was the Music Director. Sue's powerhouse vocals and her resemblance to Liza stunned the audience. With big 'show' tunes added to their repertoire, Sue and Mark resurrected U.N.I and performed as a duo at clubs and bars around Victoria. They also performed dozens of gigs for folks at senior centres and residential care facilities. In 2001, Sue and Mark took an amicable break to pursue separate interests, with the future of U.N.I always being open-ended.

In 2014, Mark had U.N.I's cassette album digitized and mastered and re-released as a CD, on the Poolwest label (thanks, Robyn and Lefty at Poolwest). The album is available through Mark's website, www.bigspeck.ca, on Bandcamp, and can be streamed on Spotify, iTunes, YouTube Music, Amazon, Tik Tok, and other sites.

BTW, the song, Downtown, that is streamable from this site, was written by Sue.

Status: On Hiatus
- Last confirmed Mar. 23, 2021
Submit info on this band to our admins