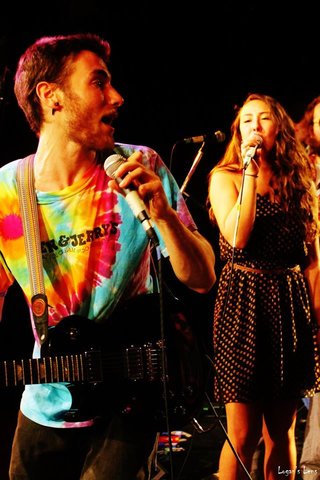 Local bands, Boots of Mischief and DownTown HoeDown, joined forces and became Downtown Mischief. DTM has gone through numerous lineup changes over the past few years, refining their sound and tightening up their overall act along the way. Fronted by two MCs, a singer, and an explosive horn section, DTM blends elements of jazz, funk, and hip hop, meeting in the middle for an organic experience. Think Beastie Boys freestyling over Tower of Power. Most members are donned with a moniker, which seems to allow their alter-egos to shine. Every set is as unique as each individual member of the DTM crew, so expect the unexpected. Keep note: these cats are infamous for encouraging audience members to come onstage to spit a verse.

DTM’s conscious lyrics remind you of the universal connection we all share. Their awareness even caught the attention of local Green Party leader, Elizabeth May, as she re-tweeted their music video for “Transparency,” a plea from the people for integrity in politics. DTM paints Victoria’s community in a way that makes you feel reacquainted with an old friend.

Playing shows up and down the island; you’ll find Downtown Mischief playing at places as diverse as farmers’ markets, house parties, and other festival stages.
No audio samples have been linked to this profile.

In this Video Artist(s) Downtown Mischief
Posted: May. 24, 2016
Status: Available for Shows/Gigs
- Last confirmed May. 28, 2015
Submit info on this band to our admins